Thanks to advances in software and hardware, projects can now be visualized interactively using real-time game engines and cutting-edge technology. More than mere exhibition of technology, interactive visualization has proven to be extremely effective and valuable in communicating projects in an entirely new way.

Interactive visualization is the heartbeat of the Civil FX team and the type of visualization we are most passionate about. In addition to using software already available, our team has developed proprietary tools developed over the course of dozens of interactive projects and based on practical feedback from clients, stakeholders and members of the public that have experienced this type of visualization first-hand. These tools and features include: 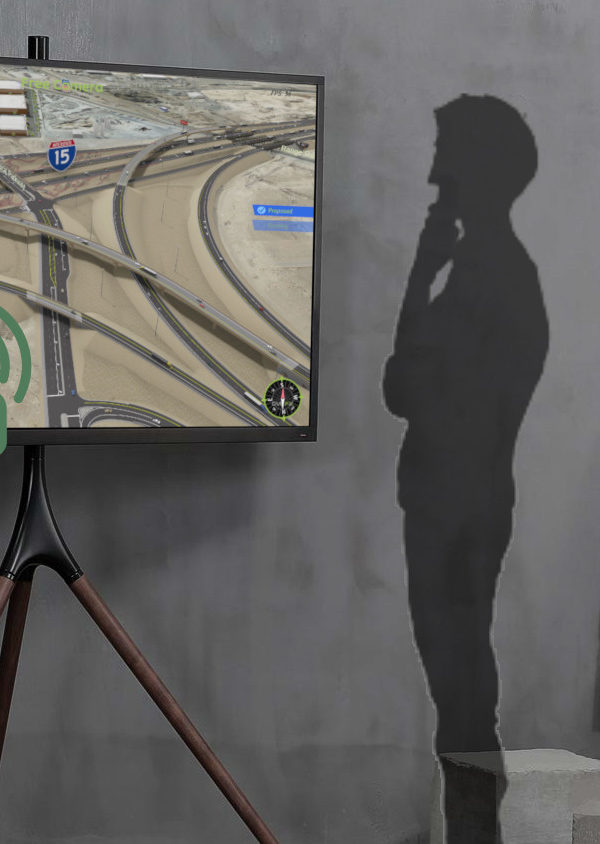 Our workflow for interactive visualization typically starts with modeling the existing conditions in 3D including buildings, bridges, billboards, trees, lights, parked cars and more. Aerial imagery and terrain mapping is the canvas upon which these objects are placed within a game engine environment (Unity 3D/Unreal Engine 4). Our menu, camera and traffic system are set up and traffic is animated along existing paths. Starting with existing features allows our team to commence work while potentially waiting for design files from the project team.

Proposed features (roads, bridges, striping, walls, barrier rail and more) are modeled in 3D from design files and added to the virtual model and phased appropriately for the existing/proposed switching feature. Other phasing elements can be added and phased as necessary. After proposed geometry and striping are modeled and added, proposed traffic can also be added using our smart traffic system.

Our Las Vegas based team can work directly with the project managers and engineers on an ongoing basis to ensure accuracy and project progress. We provide draft ‘builds’ of the application on an ongoing basis that the client or project team can run on their own computer for testing, review and feedback.  Our decades of combined experience with infrastructure project visualization and dozens of interactive projects delivered ensure that each project is accurately represented on time and on budget.

Note that a GTX 1060 level graphic card or higher is typically recommended for best performance with our interactive applications.

You can try this for yourself by clicking the purple play button (to the right or below).

In addition to navigating interactive visualization using your computer or touch screen device, we can provide even more ‘visual experiences’ including virtual reality tours, driving simulators, mobile applications and more. These alternative methods of interfacing with a project have proven to be very effective in public outreach, especially at stakeholder meetings, project offices and public meetings.

We can also develop a 360 degree virtual tour of the project similar to Google Street View that can be embedded on any web page. This is available for projects of any size and is an especially effective method of utilizing technology to communicate a project to as many individuals as possible. Our 360 degree viewer consists of images of various locations in and around the project and also includes a map to navigate as well as the ability to switch between phases at any location. You can try this by clicking the purple button to the left or below.

For more information on how Civil FX can bring your project to life with interactive visualization, email info@parametrix.com or call 702-329-9688. We can also set up a Skype meeting for real-time demonstrations of the technology and to answer any other questions you may have. If you’d like to try some of the applications we’ve built for yourself, you can request access by reaching out to our team via the same contact info.